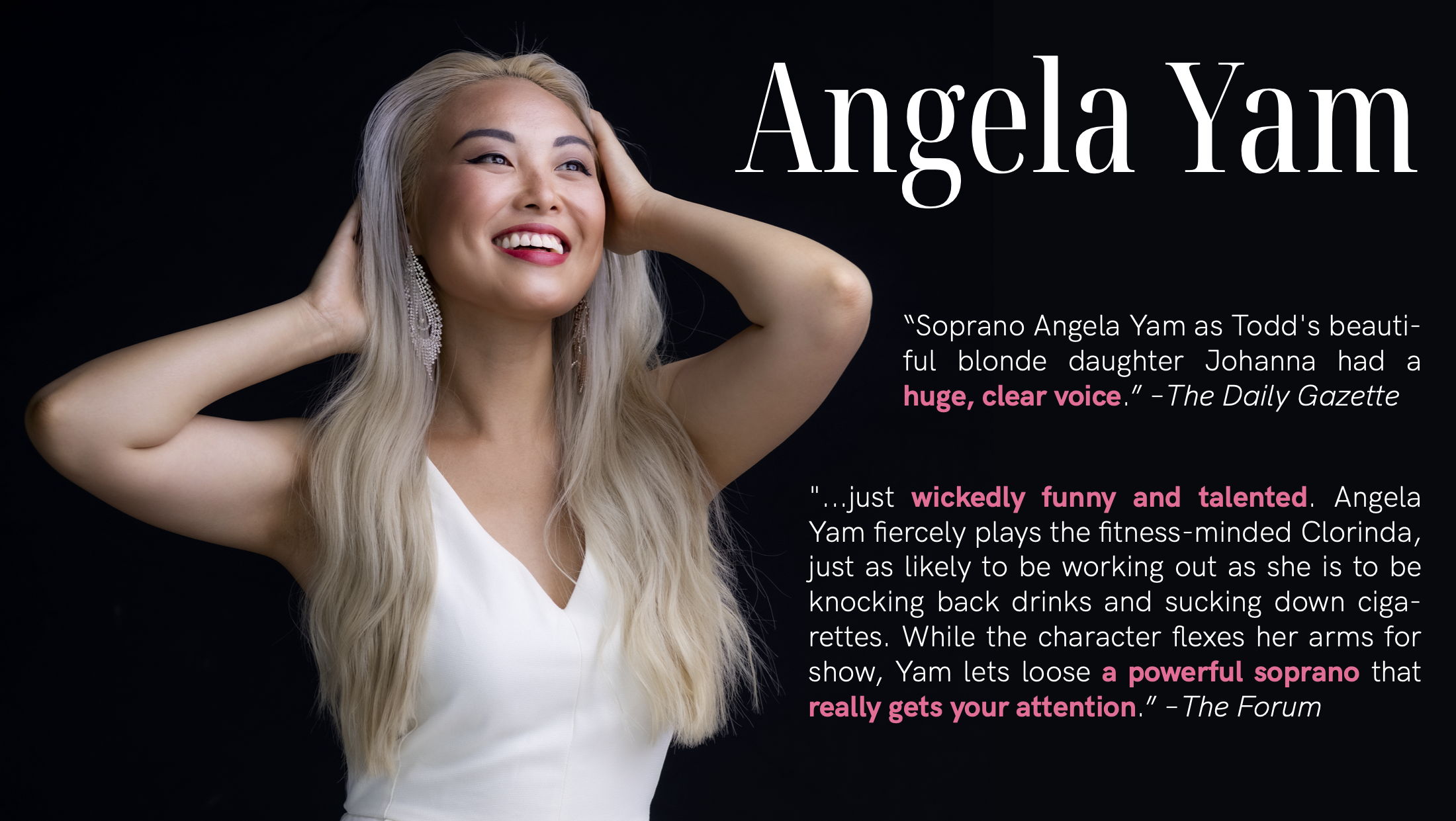 Yam's concert season includes the live premiere of Heidi Breyer's Amor Aeternus: Requiem for the Common Man at Carnegie Hall's Stern Auditorium, the Soprano Soloist in Carol Koffinke's The Five Elements, and Fractured Mosaics, a new opera with White Snake Projects in response to the rise in anti-Asian hate crimes. Yam made her choral debuts with the New York Philharmonic (Beethoven: Symphony No. 9) and Music at Co-Cath (soloist, Monteverdi: Vespro della Beata Vergine).

Yam made her professional debut with Opera Modesto as Mary Crawford (Dove: Mansfield Park), and holds a Graduate Diploma from the New England Conservatory (2021), where she performed as Blanche de la Force (Poulenc: Dialogues of the Carmelites), the Coloratura Soprano (Argento: Postcard from Morocco), Calisto (Cavalli: La Calisto), and the Soprano Soloist (Haydn's Die Schöpfung).

“The Night Falls is a new myth for our fractured era. A recurring nightmare lures a group of eclectic strangers to an abandoned Floridian tourist trap where, fearing nightfall, they band together to resist the seduction of despair. With choreography that dramatizes the leap of empathy between bodies and music that channels the polarities of surrender and resistance, The Night Falls shows the visceral power of art to brace us against the abyss.”

Angela Yam returns to the New York Philharmonic Chorus for their March to Liberation concert in David Geffen Hall.

“Still’s Symphony No. 2, Song of a New Race, celebrates the Black American as, in the composer’s words, “a totally new individual.” Adolphus Hailstork’s oratorio Done Made My Vow, A Ceremony, conceived here for the stage by director Tazewell Thompson and video artist Rasean Davonté Johnson, honors the countless Black Americans who have faced ‘the bench of injustice, and, by doing so, changed a nation.’ A World Premiere by Courtney Bryan, with a new libretto by Thompson, celebrates a variety of Black musical heritage. Leslie B. Dunner conducts.”

“A first-of-its-kind staged choral opera, ADRIFT tells a love story through the words of queer New Englander Emily Dickinson. Featuring entirely new musical settings by Nightingale resident composers, and under the direction of Angela Yam, this hour-long theatrical experience brings to life a carefully curated selection from Dickinson’s nearly 2,000 poems. The members of Nightingale Vocal Ensemble will use all of their compositional, vocal, and dramatic capabilities to celebrate—and expand—the unique capacity for an ensemble to tell a story.”

Angela Yam premieres as The Bird in O-Lan Jones’s ICELAND with Overtone Industries.

“Created by O-Lan Jones and Emmett Tinley, ICELAND is a contemporary love story enmeshed in the mythic world of Iceland. Vala falls off the map of the known world into the Dark Night of the Soul. Mundi, who has just met her at the airport, but feels an intense connection, goes to find her in the wilderness. They are helped by the Hiddenfolk, supernatural beings in a parallel world, who wish ardently for humans to find love because when people are in love they remember there is a Hidden World and connection between the two worlds opens. The Hiddenfolk evoke the Bird, The Bull, The Giant and The Dragon as needed to help the lovers in their quest.”

“An operatic response to the surge in anti-Asian hate crimes, Fractured Mosaics also reflects WSP’s continuing commitment to the live socially distant streaming performance model it developed with such success in the early stages of the pandemic…Underlying the theme of Fractured Mosaics is that even the term ‘Asian American’ is a social and political construct, completely missing the kaleidoscope of cultures and politics of the 20 different ethnic groups that are encompassed under that umbrella, groups that are geographically spread over more than half the land mass of the Earth. The production features music by Benjamin Kono, Randall Eng, Nilo Alcala, Liliya Ugay, and Shirish Korde, who along with their writer partners – Cerise Jacobs, Monique Truong, Deepali Gupta, Sokunthary Svay and Xu Xi – create operatic scenes of Asian Americans establishing themselves in the United States.”

“Love in the air - and in the glass! When Nemorino, a bashful bus boy, has his heart set on Adina, a vivacious bar owner, it’s going to take more than dogged persistence to win her over. Fortunately, a traveling liquor salesman has just the thing - a pheromone-laden brew that’s guaranteed to turn heads and hearts. But will the potion work before Adina’s is swept off her feet by a dashing soldier?”

Angela Yam makes her company debut with Chautauqua Opera in her triumphant return to Sondheim’s Sweeney Todd as Johanna.

“A dark tale riddled with ghoulish humor set in Victorian London, Sweeney Todd returns from exile to seek revenge on the lecherous Judge Turpin, who destroyed what was once a happy life. When Sweeney reunites with the devious Mrs. Lovett, the owner of a failing meat pie shop, they hatch a plan that will help her with her business struggles and satisfy his hunger for revenge.”